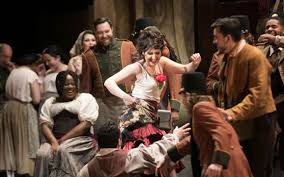 ATLANTA OPERA HAS NOT presented Carmen—one of the most frequently performed operas in the world repertory—since 2012, when the company was desperately in search of new leadership. This spring, the company, now under the care of general and artistic director Tomer Zvulun, revived Georges Bizet’s classic at the Cobb Energy Centre with a cast that included Franco-Armenian mezzo-soprano Varduhi Abrahamyan in her American debut as Carmen (seen May 4).

Evidently constrained by budget limitations, Zvulun utilized the exact same Allen Charles Klein Carmen sets that we saw six years ago.  Although initially disappointing, this reiteration was forgiven as the caliber of singing in this revival of Carmen became clear. Abrahamyan, an artist who has appeared at Opéra de Paris, Théâtre de Champs-Elysées, Zurich Opera and the Bolshoi, among other theaters, is a jewel, with a seamless lyric mezzo voice of luxuriant texture. Italian tenor Gianluca Terranova, her Don José, has appeared in Atlanta before, but never in French repertoire.  His instrument, capable of expressing heroics and sentiment at once, was well suited to his role but his French was muddy and unintelligible, especially in “La fleur que tu m’avais jetée.”

Music director Arthur Fagen led the Atlanta Opera Orchestra, opting to use spoken dialogue rather than sung recitative this time around. Sadly, Klein’s immense set and the uninspiring stage direction of Brenna Corner no favors for the Atlanta Opera chorus, which had been expertly coached by Des Moines Metro Opera’s Lisa Hasson .  Perhaps Atlanta has been spoiled by Zvulun’s more cinematic tableaus, but the crowd scenes throughout the evening were somewhat static, saved only by Abrahamyan’s instincts and a quartet of dancers from the Atlanta Ballet, choreographed by Amir Levy.