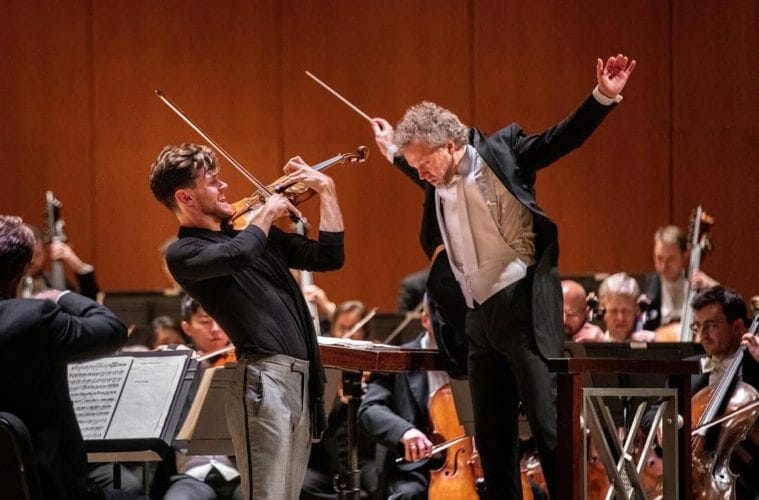 If Finnish composer Jean Sibelius were alive today you might find him perusing the self-help section at Akateeminen Kirjakauppa, a massive bookstore in Helsinki designed by the famous architect Alvar Aalto. Plagued by depression, insecurity and alcoholism, the composer left letters and diary entries that reveal his inner struggles. He was a contemporary of Wolf, Mahler and Strauss, and yet his music didn’t align with the Austro-German trends of the day. So Sibelius, more than anyone, would likely be astounded that he is now admired for the “anti-modern modernism” of his compositions.

Søndergård, who serves as music director of the Royal National Scottish Orchestra, opened the concert with Finlandia, a well-known and accessible tone poem often played by youth orchestras and college symphonies. Søndergård and the ASO began with a deliberate tempo that accelerated in order to exude Sibelius’ extra-musical meaning: a patriotic subtext best characterized by Veikko Antero Koskenniemi’s lyrics, “Oh Finland, awake!” — words that were added years later, but not sung this night. Compact and familiar, Finlandia was the portal that led to an evening of music that is not quite as straightforward but just as rousing.

Rising star violinist Blake Pouliot took the stage to play Sibelius’ Concerto for Violin and Orchestra in D minor. It’s one of the “Big Five” violin concerti that every aspiring virtuoso must master. Pouliot, who studied at The Royal Conservatory in Toronto and the Colburn School Conservatory of Music in Los Angeles, is just getting started and not long ago released a disc of sonatas by Ravel and Debussy, bookended by the Tzigane and a transcription of Debussy’s chanson “Beau Soir.” Staggeringly sophisticated in his interpretation of French music, Pouliot showed in his Atlanta debut that the demands of the Sibelius Violin Concerto are well within his wheelhouse too.

It’s always fun to see just how a violinist will choose to begin this concerto. Pouliot played the opening of the first movement mezzo piano and without vibrato — a gauzy, barely audible thread of sound. His playing throughout was immaculate, at once refined and impassioned and characterized by the full use of his bow. Unreserved, he played the violin lovingly and with technical precision. Pouliot is also visually expressive in a distinctive way. When not playing it’s apparent that he’s listening, looking at the orchestra and responding almost as if he’s hearing their part for the first time.

The audience, though well-versed in concert etiquette, still couldn’t help but to applaud between movements. Before leaving the stage Pouliot rewarded this faux pas with an encore, his own transcription of “The Last Rose of Summer.”

After intermission, Søndergård launched into Sibelius’ two final symphonies without pausing between them. It was an interesting choice as Symphonies No. 6 and No. 7 are entirely dissimilar; the first, containing lyrical melodies and contrapuntal lines reminiscent of Palestrina, and the latter mosaic-like, with miniature motives that are difficult to pin down. Symphony No. 6 consists of four movements and abides by classical symphonic formal structure while No. 7 is compressed into one epic movement.

At the outset Søndergård instructed us to listen for the roar of the North Sea, but the landscape that the orchestra painted was much more complex. Of note was the elegant fourth movement, which began peacefully with a lilting, dancelike motive, and finally gave way to playful rhythms and unpredictable accents in the timpani. Contrapuntal ribbons of sound were played with lightness. Strings and winds took turns evoking an atmosphere that Sibelius must have hoped for when he said that this symphony reminded him of the “scent of the first snow.”

Finally, we heard the unassuming C major scale of Sibelius’ Symphony No. 7. While each section within the ASO played micro-motives, the brass gave this single movement a feeling of expansiveness. The result was a fantasy-like journey with contrasting episodes — disparate yet somehow unifying.