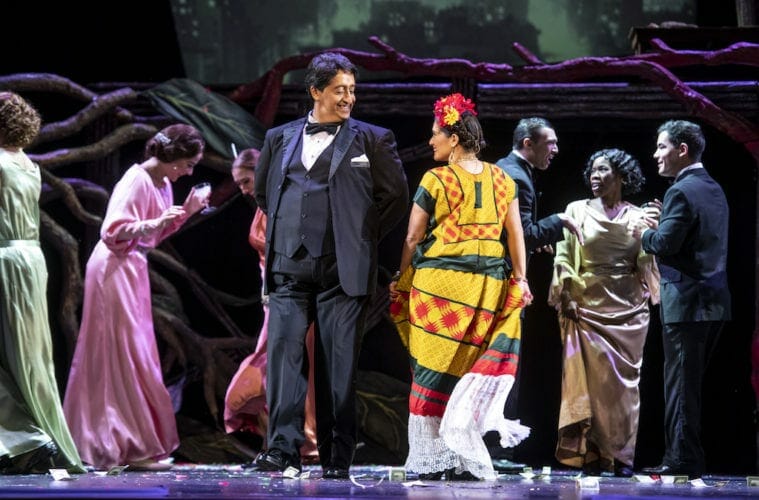 Ricardo Herrera and Catalina Cuervo depict the torrid marriage between Diego Rivera and Frida Kahlo. (Photos by Rafterman Photography)
Mexican painter Frida Kahlo didn’t know that her art was surrealistic until the French poet André Breton told her. In Breton’s estimation, whether it was a self-portrait or a collection of images within What the Water Gave Me, Kahlo accomplished a creativity unhindered by realism. Now more than a half-century later, Kahlo’s work and sense of fashion are considered iconic, and Robert Xavier Rodriguez’s opera Frida, which premiered at the American Music Theater Festival in 1991, has emerged from a hibernation of sorts.

On Saturday evening, The Atlanta Opera debuted a reimagined and compelling production of Frida to a sold-out house at the Sandy Springs Performing Arts Center. The production (through October 13) is part of the opera’s Discoveries series, an initiative piloted by General and Artistic Director Tomer Zvulun to attract new audiences to opera in satellite venues around the Atlanta metropolitan area.

Rodriguez’s Frida is episodic, attempting to capture the most poignant moments of the heroine’s life. The opera opens revealing Frida as a schoolgirl in Mexico City, brash and boisterous. Frida witnesses social injustice and poverty, and her sense of social consciousness is awakened. It foreshadows the revolutionary spirit that fuels her future political and personal liaisons with members of the Communist party, including exiled Russian revolutionist Leon Trotsky.

A traumatic trolley crash leaves 18-year-old Frida severely injured and confined to bed for several months, but it is the catalyst that leads her to paint for the first time. She meets the painter and activist Diego Rivera (whose portly appearance Frida later likened to a toad standing on its hind legs), and the two begin a tempestuous marriage that swirls with world travel, infidelities, miscarriages and divorce. It’s a story that Texas-born composer Rodriguez tells in musical terms, representing the characters and places with imaginary folk songs and “stolen” music from George Gershwin, Stephen Sondheim and Kurt Weill while using distinctive instruments such as the accordion and the Mexican marimba. 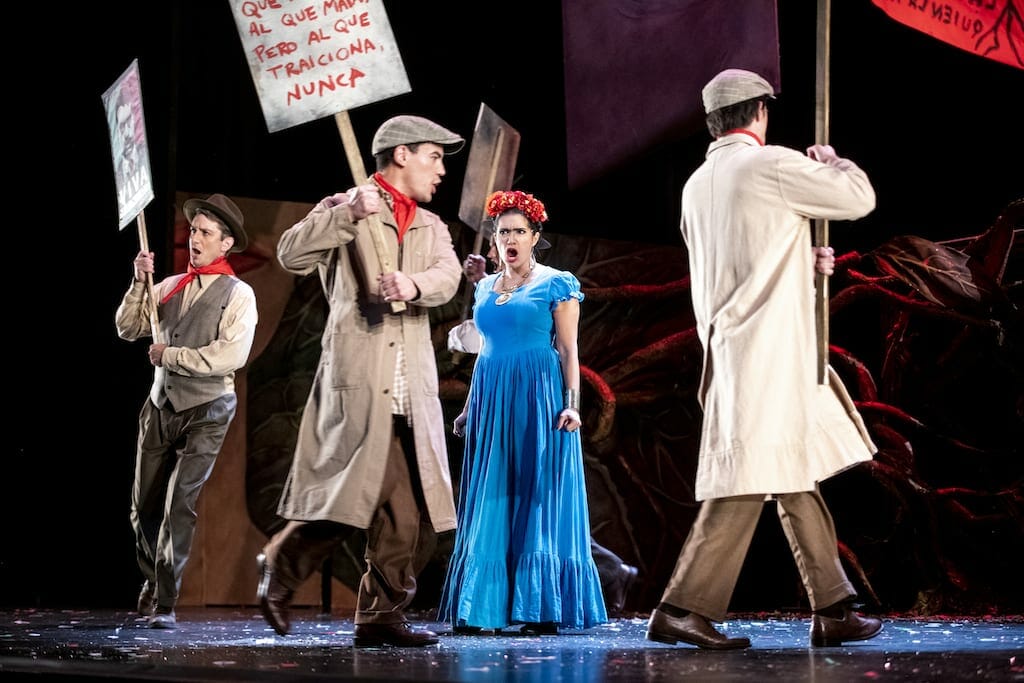 Members of The Atlanta Opera Artist Studio round out the cast of Frida nicely, sometimes filling in more than one role. Standout Gina Perregrino, a Carmen in the making, sings Dimas’ mother and Rivera’s ex-wife Lupe Marín with fervor, and Andres Acosta lends his resplendent tenor to the roles of Alejandro and Leon Trotsky.

Production director Jose Maria Condemi and choreographer Ricardo Aponte have incorporated a theatrical representation of some of Frida’s memorable paintings in part through ballet (The Wounded Deer, 1946, danced by Miriam Golomb) and traditional Mexican dance, courtesy of the Alma Mexican Dancers. Other scenes are surreal in nature, embellished by the appearance of masked Calaveras, who seem to reside in Frida’s imagination.

An evening well-spent, Condemi’s provocative yet uncluttered staging of Rodriguez’s theater piece allows us a glimpse of Frida’s psyche and suffering, transcending both musical and cultural barriers.

One thought on “Review: The Atlanta Opera’s “Frida” is a bold and provocative work”