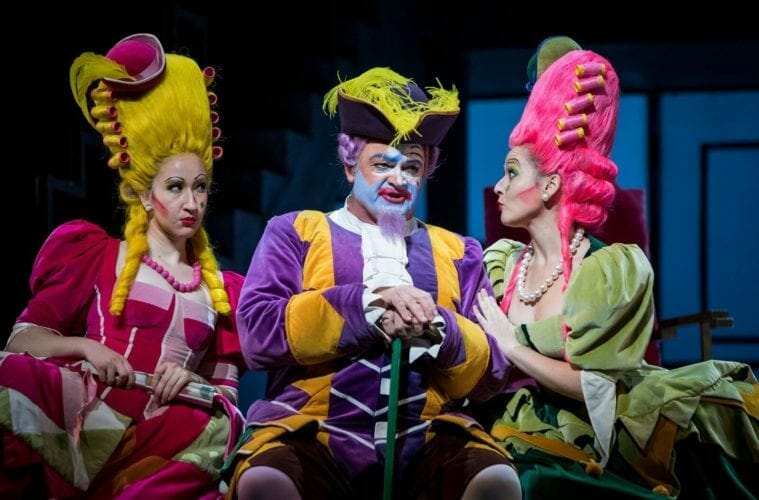 Dale Travis, center, as Don Magnifico, flanked by Elizabeth Sarian as Tisbe (left) and Bryn Holdsworth as Clorinda (Photos by Raftermen Photography)
NOVEMBER 5, 2019
Everyone loves a good fairy tale. They’re relatable, tapping into deeply human themes like true love, heroism and justice. But there’s always an element of enchantment underlying a good fairy tale too — perhaps a magical transformation or a character in disguise.

Cinderella is just one of those timeless tales. The story, adapted by Walt Disney as most of us know it, was originally penned by Charles Perrault in 1697. Yet long before Disney gave us the animated, iconic princess in the blue dress, Italian composer Gioachino Rossini created an operatic version for Rome’s Teatro Valle that was an instant hit. Rossini’s early 19th-century version has some significant variations, though. Cinderella is named Angelina. Her prince charming, Don Ramiro, is disguised as his own valet, Dandini, throughout most of the opera. Angelina is despised not by a cruel stepmother but by her stepfather, Don Magnifico.

There is no fairy godmother; rather, the one who recognizes Angelina’s goodness and makes her dream of going to the ball come true is Alidoro, the prince’s tutor. And one more thing. There’s no glass slipper. Rossini and his librettist Jacopo Ferretti managed to work a pair of matching bracelets into the story. All of this combined with a lot of florid singing, of course, is what really creates the magic in this operatic fairy tale.

On Saturday evening, The Atlanta Opera offered Rossini’s altered La Cenerentola at the Cobb Energy Performing Arts Centre, inaugurating its 40th-anniversary season with its first mainstage production (continuing through November 10). It was a coproduction of Houston Grand Opera, Welsh National Opera, Gran Teatre del Liceu and Grand Théâtre de Genève — conceived by Joan Font and Joan Guillén circa 2007 — that could be best described as “Alice in Wonderland meets Versailles.” 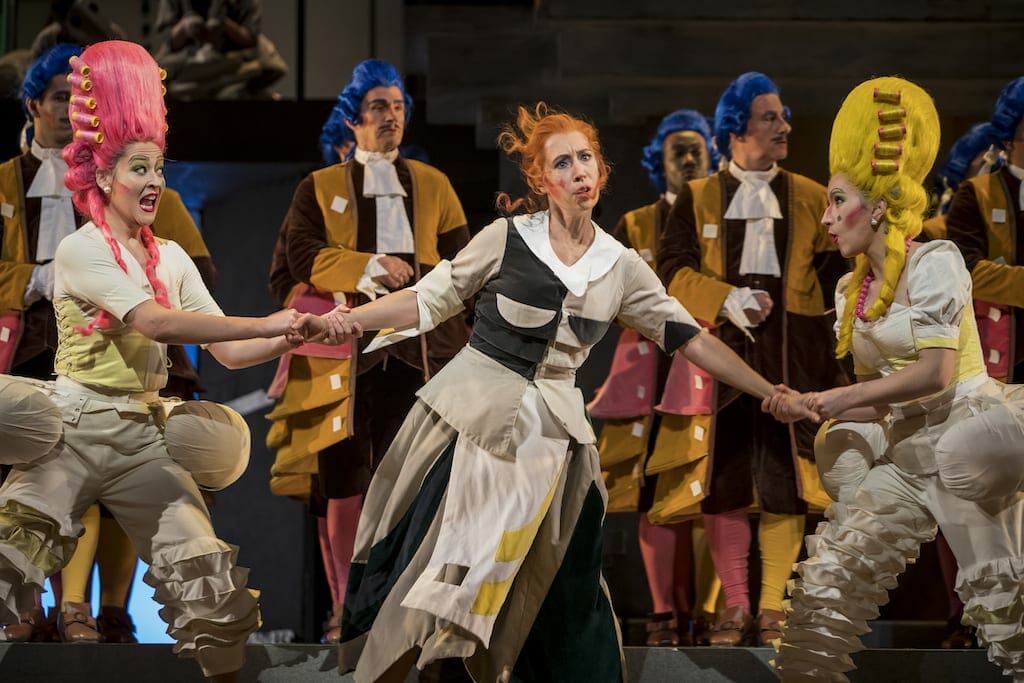 Beguiling and a little wacky, the stark set was embellished by cartoonish characters in breathtaking costumes. Sisters Clorinda (Bryn Holdsworth) and Tisbe (Elizabeth Sarian) looked like Marie Antoinette wannabes with neon hair (thanks to wig and makeup designer Brittany Crinson), while pasty-faced Don Magnifico (Dale Travis), Dandini (Thomas Glass) and Don Ramiro (Santiago Ballerini) appeared to have seemingly leapt from the pages of Lewis Carroll. Six oversized mice with whopping, rodent-like tales inhabited the stage at all times, moving about and providing Angelina with much need moral support.

Only mezzo-soprano Emily Fons in the title role looked “real,” endearing and sincere at once. A singer revered for her interpretations of Mozart, Rossini and some choice contemporary operatic heroines, Fons mastered Rossini’s rapid-fire runs all evening, her light voice moving effortlessly. Tenor Santiago Ballerini, a former member of The Atlanta Opera Studio, returned to Atlanta to sing the undercover prince. Ballerini is not Fons’ equal in fioritura (extended embellishments of the vocal line), but his honeyed vocalism is compelling. The true valet, Dandini — played by baritone Thomas Glass, the 2019 Grand Prize Winner of the Metropolitan Opera National Council Auditions — supplied the comedy in this chaotic opera buffa. Armed with goofball charisma, Glass garnered an abundance of laughter.

Magic is an elusive element, as is a satisfying opera production, and this trip down the rabbit hole was just slightly off-kilter. Regrettably, fussy design elements and staging in Act II seemed to interfere with the singers’ primary musical mission. Amidst the sporadic disarray, conductor Dean Williamson couldn’t seem to keep the lagging violins up to speed, and lightning-fast ensemble numbers were chaotic.

But in the end, Emily Fons entered unflustered and bestowed us with a rendition of Angelina’s last scena and rondo finale, “La Nacqui all’affanno e al pianto,” that was nothing short of exquisite, assuring us that they all lived happily ever after — if only in her dreams.