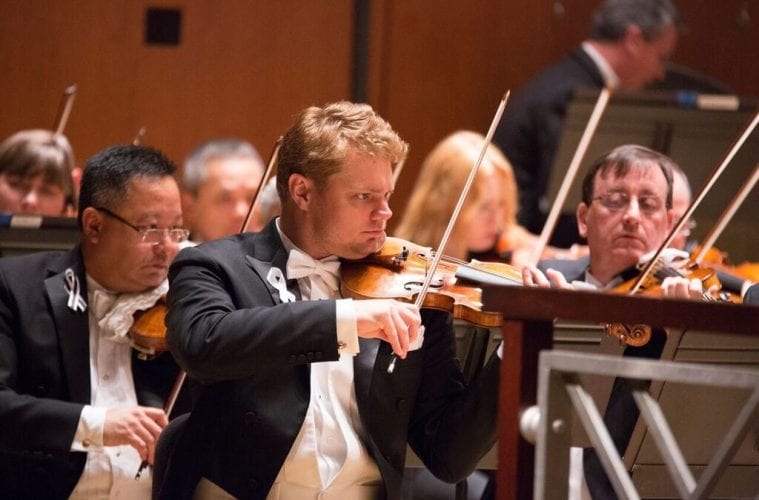 Atlanta Symphony Orchestra Concertmaster David Coucheron played strong lines on the Shostakovich piece. (Photo courtesy Atlanta Symphony Orchestra)
NOVEMBER 12, 2019
Despite the claim of composer Dmitri Shostakovich that his final symphony contained no extra-musical meaning, doubt remains. Post-glasnost realizations make it more likely that his Symphony No. 15, which premiered in 1972, encompasses programmatic significance camouflaged by a masterful composer then at the height of his creative powers.

On Saturday evening, Principal Guest Conductor Donald Runnicles and the Atlanta Symphony Orchestra performed Shostakovich’s distilled work — riddled with musical allusions and quotations, musical monograms and codes — alongside Peter Ilyich Tchaikovsky’s Violin Concerto, featuring Canadian violinist James Ehnes. The evening marked the 30th anniversary of the dismantling of the Berlin Wall, a fact made even more poignant by the music.

We know only that Shostakovich once made reference to the first movement as “describing childhood — just as a toyshop, with the cloudless sky above.” Yet the innocent first motive, played by flutist Christina Smith, gradually gave way to bizarre and unexpected quotations of Rossini’s William Tell overture and an unraveling that led us to wonder what kind of childhood we were to envision. The ASO musicians, many featured as soloists in this puzzle, created a seamless continuity of what sometimes seemed like a senseless stream of consciousness, interweaving dramatic highs and lows.

Presumably trivial musical ideas gave way to bleakness in the second movement, sanctified by an achingly exquisite solo line played by principal cellist Rainer Eudeikis and eventually taken up by Concertmaster David Coucheron in a timbre that matched precisely.

It’s been said that Shostakovich knew that this would be his last symphony and that he peppered the score with signposts from his musical memory. A self-fulfilling prophecy, he suffered a heart attack after its completion but survived to hear his son Maxim conduct it at the Moscow Conservatory. The composer passed away in 1975 after years of infirmity.

A subdued brass section opened the fourth movement; it was Richard Wagner’s “fate motive” accompanied by the cellos, playing a pizzicato passacaglia as one voice beneath a meandering violin line. As if symbolizing the resentment Shostakovich carried toward Stalin and Soviet controls that constrained him for a lifetime, the ASO finally broke free from all dynamic limitations and unleashed its power (for a moment) before succumbing to a reprisal of the fate motive and curious ticking sounds in the percussion. Shostakovich’s striking use of percussive elements within Symphony No. 15 — timpani, celesta, whip and woodblock, to name but a few — were memorable and crisply executed.

The second half of the concert took us back a century to something decidedly more tonal, the 1878 violin concerto that Tchaikovsky dedicated to Leopold Auer. James Ehnes, Grammy-award-winning virtuoso, entered the stage with a reserved demeanor and quietly began the concerto’s primary theme in its most basic iteration. Ehnes didn’t project a flashy or demonstrative quality onstage but instead let the music speak for itself. With each variation of the theme, he upped the ante.

When Ehnes finally handed the theme over to the orchestra, they didn’t disappoint. And yet, we were still unsure of Ehnes’ commitment until the unaccompanied cadenza at the end of the development when he made his 1715 “Marsick” Stradivarius sing. Provocative double stops alternated with the most delicate of harmonics until the orchestra rejoined him and we were once again graced with Tchaikovsky’s arresting theme, played now by the flute.

Ehnes’ spot-on intonation, coupled with undeniable technical prowess, made the allegro vivacissimo more than satisfying. Never harsh-sounding, even in the most rapid passages, he maintained a steady bow pressure and a warm tone.

Tchaikovsky’s subtle nod to Eugene Onegin in the third movement was a lovely moment for the orchestra and a temporary respite before the real musical fireworks began. It was a triumphant close to an evening that showcased the music of both Shostakovich and Tchaikovsky, prolific and paradoxical.