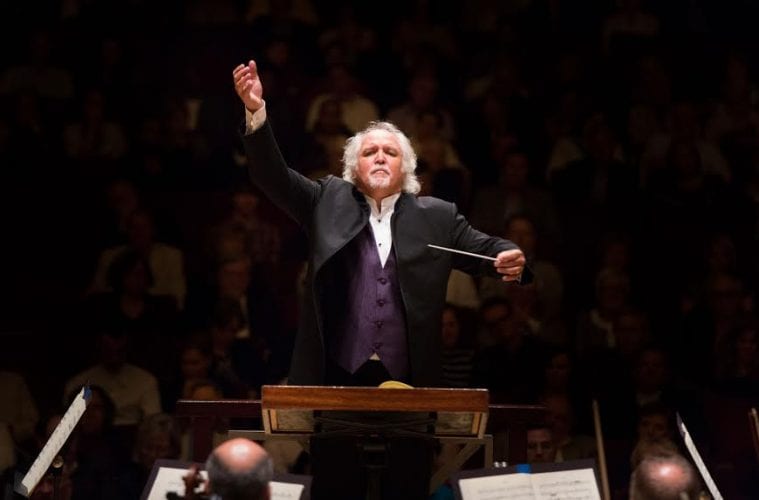 DECEMBER 26, 2019
It’s a period of transition for the Atlanta Symphony Orchestra as it launches a high-profile search for music director Robert Spano’s successor and considers several of this season’s guest conductors as his potential replacement.

The year also marked several stellar productions by The Atlanta Opera and recitals at the Schwartz Center for the Performing Arts.

Since the search for the ASO’s new music director — its chief conductor and artistic leader — has begun in earnest, and Spano is set to step down at the end of the 2020–21 season, let’s discuss which guest conductors merit consideration. The numbers of visiting maestros will pick up this spring, but this fall we heard two possible contenders for the long-term job: one outside candidate, one completely familiar. 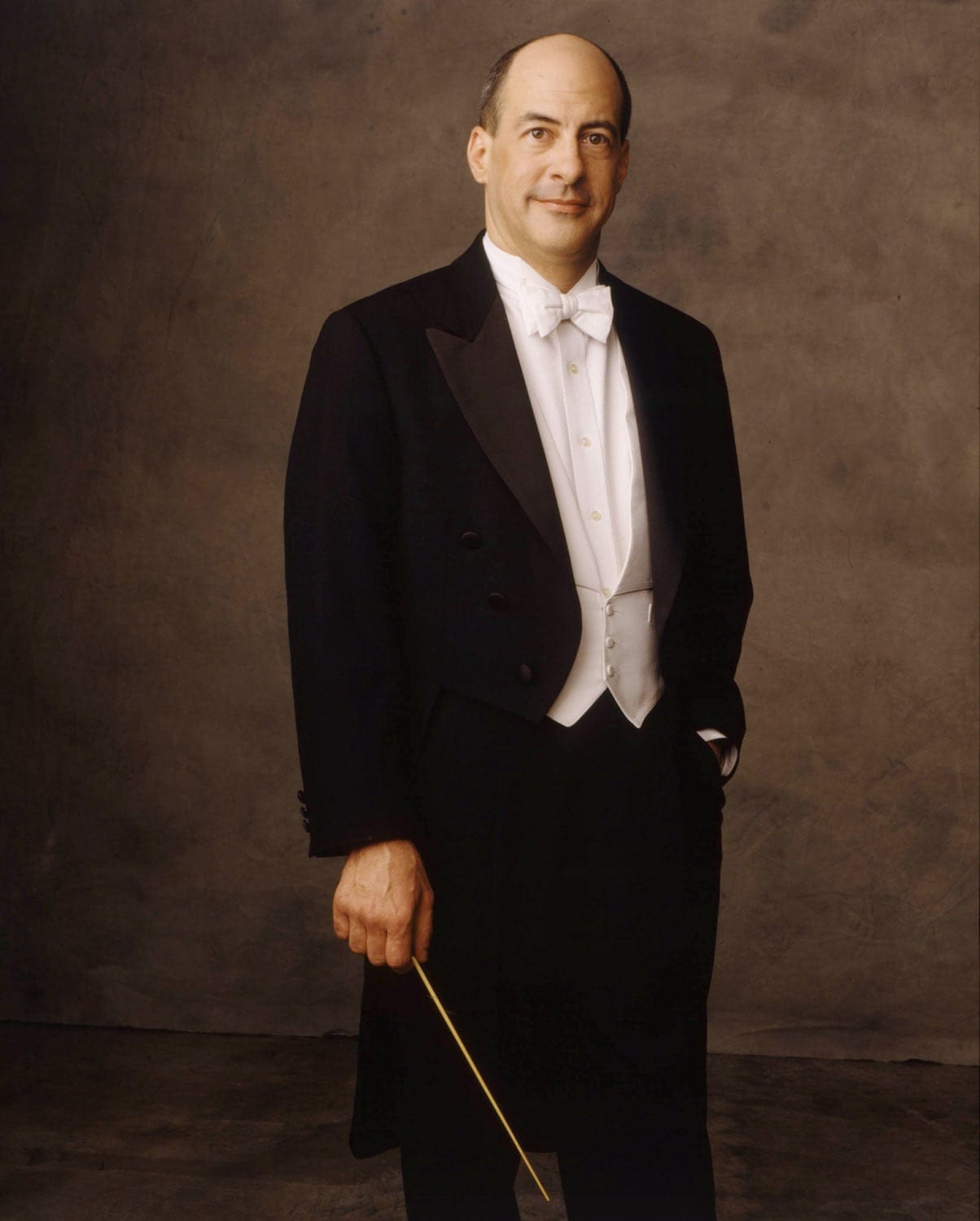 On October 17 and 19, the Dutch conductor Edo de Waart, who recently led the Milwaukee Symphony Orchestra, elicited sparkling colors and passionate vibratos in Strauss’ tone poem Ein Heldenleben. Does de Waart, at 78 — though still at his peak as a conductor — still have the drive to deal with the daily rigors of a music director position — crafting music programs, fundraising and participating in hiring and administrative decisions?

We also heard principal guest conductor Donald Runnicles lead three concerts, and he might be getting a stronger look. He has consistently pushed the ASO to a higher level of performance this season, balancing the orchestra’s instrument families and pushing them relentlessly to play with greater expression and cohesion. It’s not known, however, whether Runnicles, 65, is even interested in the full-time job.

At the season’s midpoint, the orchestra has had several standout performances.

The fall focus was on romantic and late-romantic styles, with occasional excursions to 20th-century and contemporary works. Wagner operatic overtures have been the most consistent thread so far, with preludes and other pieces from Meistersinger, Lohengrin and Parsifal. Of these, the Prelude to Parsifal was the orchestra’s best performance, with lush, rich string colors and a fervent religious atmosphere elicited by Runnicles.

The season’s longest individual work was Mahler’s monumental Eighth Symphony (November 14 and 16), which involved the Gwinnett Young Singers and the Glee Clubs of Morehouse and Spelman colleges all vocalizing. Despite occasional balance issues between the orchestra and soloists, all-star sopranos Evelina Dobračeva and Erin Wall shined with a duel between their powerful, expressive solos. 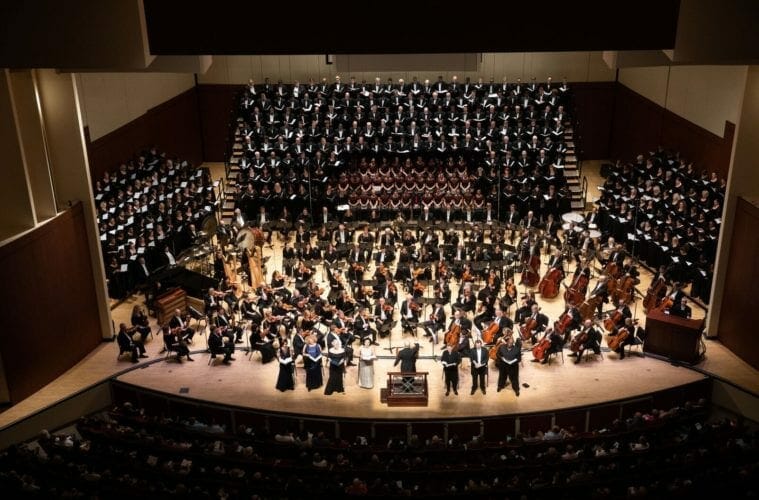 A central focus under Spano has been the championing of contemporary composers using accessible, often romantic harmonic languages. We heard a repeat performance of Jennifer Higdon’s Concerto for Orchestra (September 20–22), a work commissioned by the Philadelphia Orchestra and first performed in 2002. Higdon, one of the Atlanta School of Composers, is a Pulitzer- and Grammy-award recipient. She spent the first 10 years of her life in Atlanta.

We heard Rapido! composition contest winner Brian Nabors in the world premiere of a new tone poem, Onward (November 21 and 23). Nabors is African American and a rising composer from Alabama who’s studying with composer Carl Vine at the Sydney Conservatorium of Music.

The Higdon and Nabors pieces featured vibrant colors from many orchestral sections and soloists and had a variety of ebbing and flowing sections in which melodic ideas were gradually developed. The Higdon focused on rhythmic ideas, the Nabor on being tuneful and melodic. Hopefully we’ll hear more from these composers soon.

Credit also goes to the orchestral sections that play at their best. The ASO’s wind players, always virtuosic and leaving egos at the door, have been especially strong. The strings — particularly the violins — have been playing at a consistently high level, especially in such works as Mahler’s Eighth, which presents challenges in all its string parts. 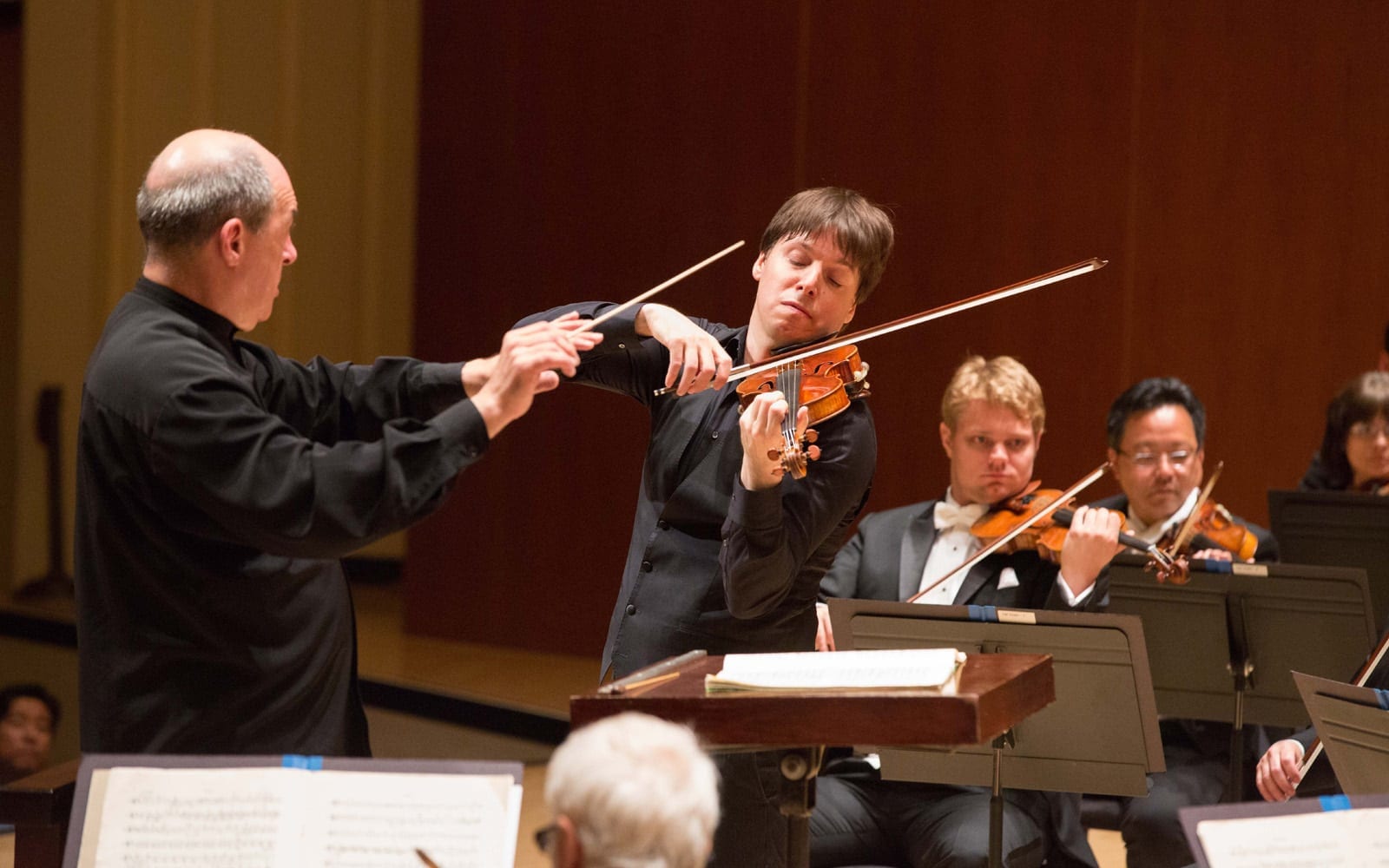 Percussion, although often literally (and figuratively) on the periphery of the ensemble, shined in Higdon’s Concerto for Orchestra (September 20–22) and Bartok’s Second Piano Concerto (October 3–5). Brass, although mostly inconsistent, stepped up to the plate October 17 and 19 in Strauss’ Ein Heldenleben, effectively projecting a strong, rounded tone.

Bell played romantic warhorses: Wieniawski’s Second Violin Concerto and Sarasate’s Zigeunerweisen. He’s an athletic player and technical wizard, with double stops and pizzicatos played faster and more accurately than any other living performer. His Sarasate interpretation was breathtaking, with a mix of sensitive dynamic shadings and compelling improvisation-like moments that beguiled and surprised the audience.

Irfan’s performance in the Bartók Second Piano Concerto showed incredible promise. Here’s a Juilliard student, only 20 years old, who demonstrated a rich, rounded tone, impeccable technique, sensitive dynamic nuances and exquisite timing (he’s also a conductor), all in a notoriously difficult piece. He and Spano worked so well together that we hope they collaborate again in the near future.

Ax’s performance of the Brahms’ First Piano Concerto, while not technically the most perfect we have heard from him, was inspiring because he elevated the performance level of the entire orchestra. In his solos, he asserted a golden, rounded tone, brought out complex, polyphonic textures and shaped long, passionate melodic lines. He repeatedly immersed himself in the orchestra’s sound and emerged in the next solo with a more intense and surpassing expression. By the second movement, the orchestra played reverently and softly, and all performers seemed to be listening to each other in a new, heightened way. At the final applause, Ax shrugged off the audience’s praise, modestly raising up the contributions of the orchestra instead. We hope the ASO keeps this spirit of cooperation and collaboration in 2020. — BW

In the past few years, Tomer Zvulun, The Atlanta Opera’s general and artistic director, has unabashedly promoted the stage works of American opera composer Jake Heggie. In February, he set his sights on Heggie’s first hit and most popular stage work, Dead Man Walking, an adaptation of Sister Helen Prejean’s 1980s memoir chronicling her prison ministry at the Angola State Penitentiary in Louisiana. 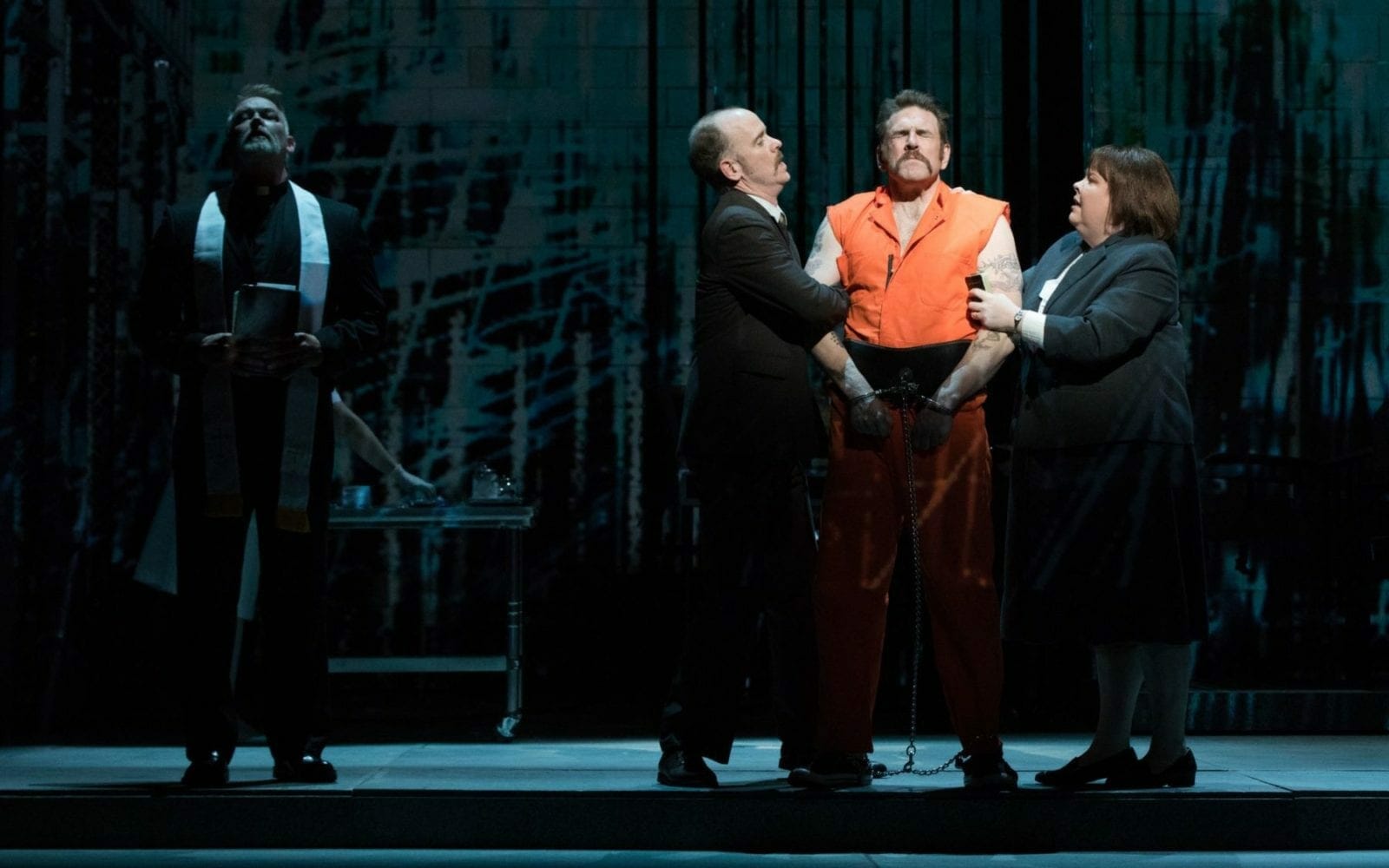 A well-timed choice, the work has circled the globe in the past 20 years and will finally reach the Metropolitan Opera stage in New York next season when Yannick Nézet-Séguin becomes music director there. The Atlanta production featured an all-star cast beginning with international opera star (and Rome native) Jamie Barton as Sister Helen and Michael Mayes, the sinewy baritone who has made Joseph De Rocher his signature role.

But it was also a reunion of sorts for many of the fantastic leading men and women of recent Zvulun productions. Seeing and hearing the likes of Maria Zifchak, Jay Hunter Morris, Kevin Burdette and Wayne Tigges — all in supporting roles — was pure luxury.  — Stephanie Adrian

One step forward, two steps back

In October, The Atlanta Opera announced that it had successfully negotiated a new five-year labor contract with The Atlanta Opera Orchestra. This sounds like good news, as an ambitious regional opera company that offers 32 performances a year needs a reliable band. This orchestra, however, only seems to play its best when conductor and music director Arthur Fagen is on the podium, as was the case in May when it produced a highly satisfying La Traviata designed by Peter Davison and Jess Goldstein.

In November, we heard something entirely different, an undisciplined orchestra playing the opening-night performance of Rossini’s La Cenerentola. It makes us want to channel George Bernard Shaw and ask, “Who or what is responsible for these deficiencies and inconsistencies?” — Stephanie Adrian

As the final stop on the Lawrence Brownlee-and-Eric Owens 12-city tour, Atlanta heard what may arguably have been its finest song recital of the past decade. It combined vocal splendor and keen programming at Emory University’s Schwartz Center for the Performing Arts in March. 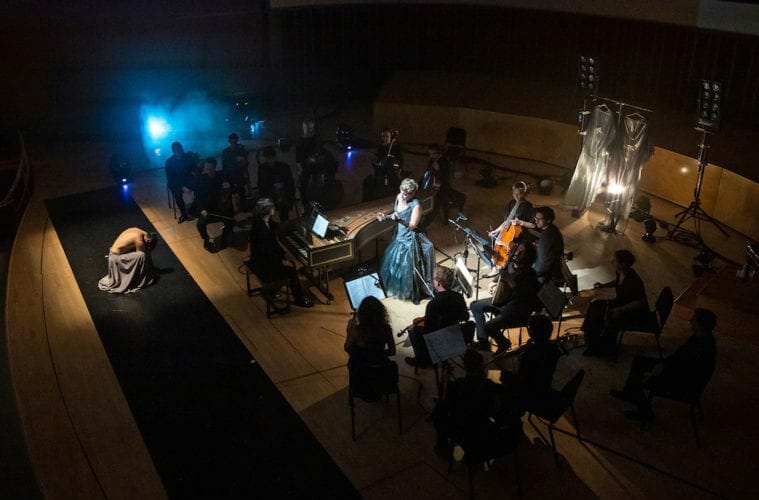 Accompanied by pianist Myra Huang, Brownlee and Owens gave us celebrated arias by Mozart, Donizetti and Verdi, as well as traditional spirituals and gospel picks. We’d expect nothing but the best from these accomplished singers — one who’s the go-to bel canto tenor in opera today, the other at the top of his Wagner game — but the unexpected occurred here, an elusive alchemy between artists and audience, that intangible element that goes beyond showmanship and sound. — Stephanie Adrian

Why can’t more concerts be like the one performed by mezzo-soprano Joyce DiDonato in November at the Schwartz Center? DiDonato, accompanied by Maxim Emelyanychev on the harpsichord and his crack early-music ensemble Il Pomo D’Oro, melded theater, immersive storytelling and atmospheric lighting with her mostly baroque opera arias.

Her energy and drive are rare among classical artists. DiDonato could have easily sung the exact same program without lights or a dancer or a theatrical presentation. Instead, her In War and Peace: Harmony Through Music made for a thought-provoking event, and perhaps the concert of the year. — PR