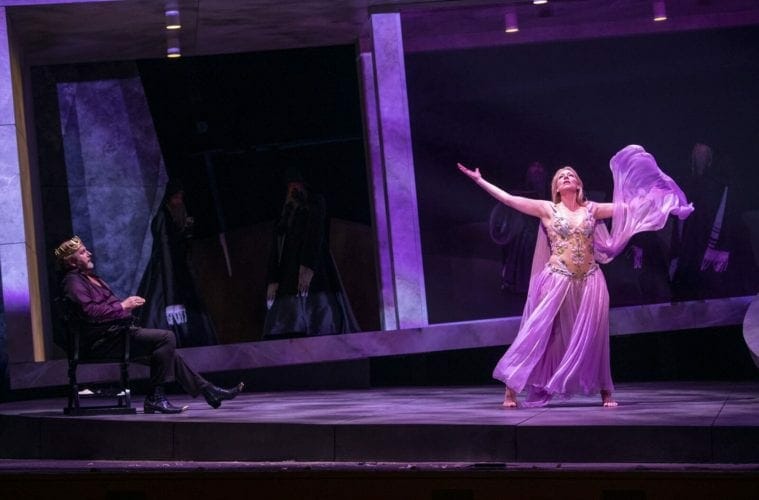 Snellville native Jennifer Holloway (right) brings dimension to the controversial character of Salome. (Photos by Rafterman Photography)
JANUARY 28, 2020
“Two souls with but one nasty thought; two pens that drool as one” wrote New York critic W.J. Henderson in 1907, finding Oscar Wilde and Richard Strauss well matched when it came to the play and, soon after, the opera version of Salome. Despite Salome’s salacious subject matter — or perhaps because of it — the opera has endured.

It’s Wilde’s twisted imagining of the circumstances surrounding the beheading of John the Baptist (a.k.a. Jochanaan) while imprisoned by Herod Antipas, Tetrarch of Galilee, circa A.D. 30.

Herod’s obsession with his stepdaughter, Salome, leads him to offer her whatever her heart desires . . .  if only she’ll dance for him. Salome obliges and, as the heart wants what it wants, she demands the head of John the Baptist served to her on a silver platter. Herod is understandably blindsided by Salome’s demand, but having sworn an oath and unable to persuade her otherwise, must make good on his promise. Ultimately, John loses his life, Salome receives her prize and comes completely unglued, serenading his severed head and kissing his red lips. Herod, Salome’s mother Herodias, and everyone at the palace are uniformly horrified. The curtain falls after Herod orders his guards to kill Salome. It’s a shocking tale in every aspect, tidily executed.

On Saturday evening the Atlanta Opera offered a new production of Strauss’ Salome at the Cobb Energy Performing Arts Centre. Several years in the making, Artistic and General Director Tomer Zvulun assembled both a brilliant cast and an enviable creative team to birth a production that must have been a sizable financial investment. His dream team was comprised of set designer Erhard Rom, costume designer Mattie Ullrich, and choreographer Amir Levy. Zvulun, a stage director at his core, brings to life a depiction that is distilled and grotesquely beautiful, making it impossible to look away. 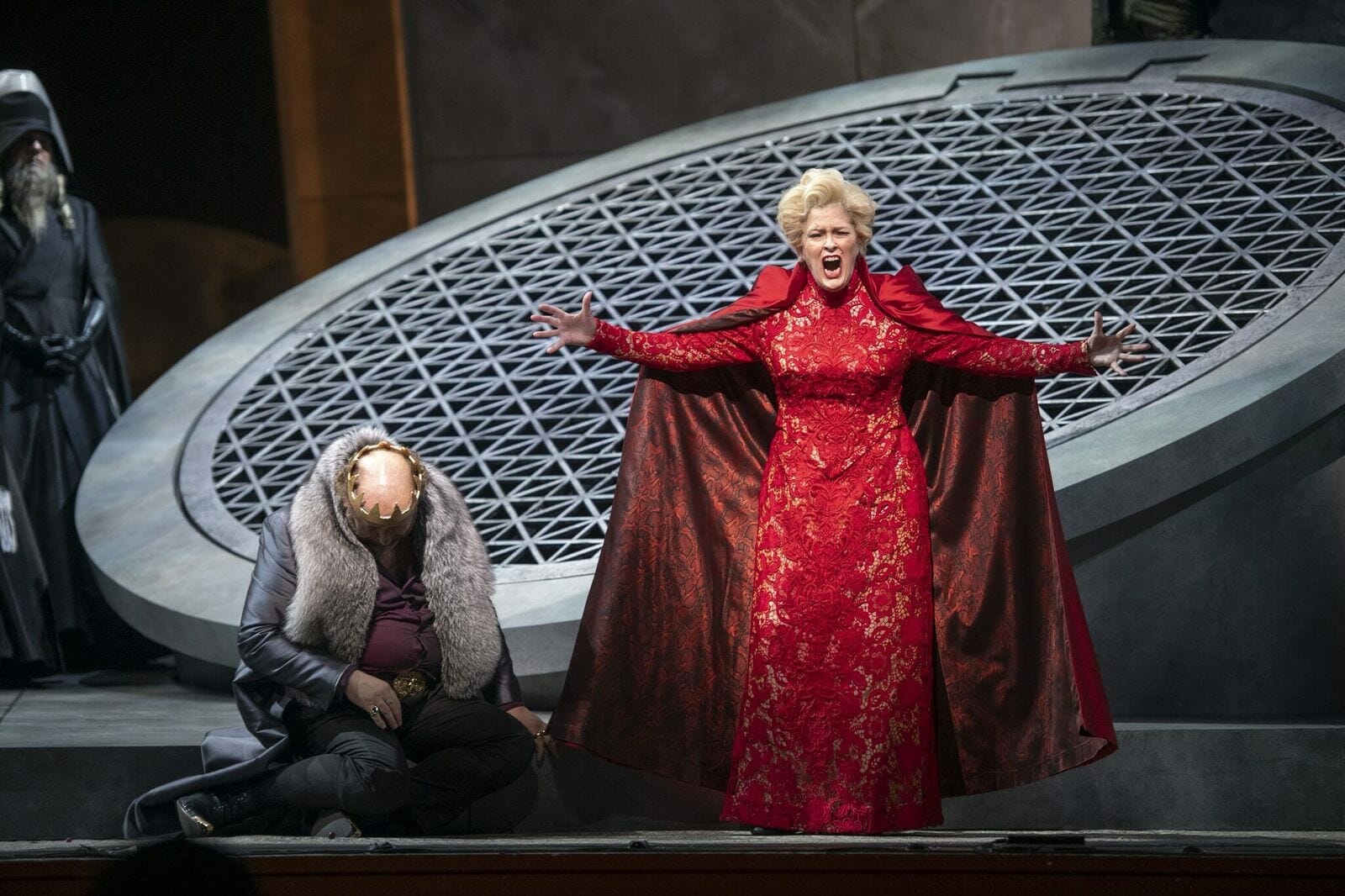 The monstrously demanding title role is sung by Georgia native Jennifer Holloway. Although based in Atlanta, Holloway spends most of her time performing in Europe, making her bread and butter singing the music of Strauss and Wagner. Holloway is a blonde and statuesque dramatic soprano who shows she is also exceedingly smart. Her Salome is eerily youthful, evoking our empathy at first. In an impossible situation — coveted by a murderous stepfather as well as his soldiers — she has no choice but to become as dysfunctional as the world in which she resides. Holloway’s kaleidoscopic soprano conveys those moments of youthfulness as she initially rebuffs Herod and seems oblivious of Narraboth’s infatuation with her, but also expresses her subsequent lust and madness.

In fact, it is a cast to die for all around. Sounding vibrant, superstar Jennifer Larmore sings Herodias, commanding the stage with a Sharon Stone-esque demeanor. Tenor Frank van Aken powerfully sings the role of Herod, his desire for Salome nauseating as he saunters around in gold-tipped cowboy boots. Adam Diegel makes a strong impression as Herod’s captain of the guard Narraboth, his sturdy vocalism entirely agreeable. While Nathan Berg gives a thought-provoking rendition of Jochanaan, he roundly denounces Herodias and her daughter with a deep-rooted voice that is ill-matched to his ragged appearance and skittish demeanor.

Conductor and Music Director Arthur Fagen manages the requirements of a complex score, keeping balance in check and holding the orchestra to a higher standard. The afore-mentioned critic W.J. Henderson claimed that the dissonance of Strauss’ “ill-mannered” score prevented the listener from knowing — or caring — whether the musicians were really playing the right notes. There is some truth to this, but the Atlanta Opera orchestra also provides moments of loveliness as it did during the “Dance of the Seven Veils” in which oboist Diana Dunn plays a bewitching solo to accompany Amir Levy’s provocative troop of dancers.