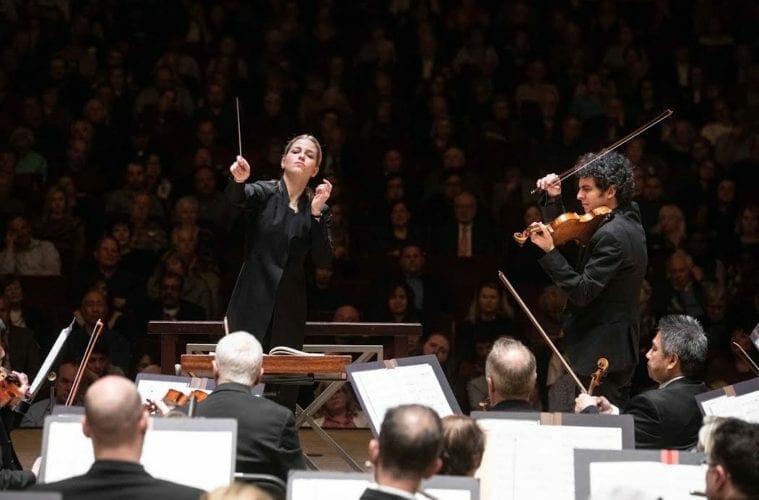 Guest conductor Karina Canellakis led the Atlanta Symphony Orchestra with grace and skill Thursday night, receiving at least three curtain calls. (Photos by Jeff Roffman)
JANUARY 31, 2020
Robert Spano announced exactly two years ago that he’ll soon step down as the Atlanta Symphony Orchestra’s music director.The New York Times calls him the man who made the ASO “a force to be reckoned with in contemporary American music,” and his departure spells opportunity for a new talent able to conduct, fundraise and inspire.Guest conductor Karina Canellakis, one of many candidates in the running to replace Spano, stepped to the podium Thursday to lead a program that included Ludwig van Beethoven’s Leonore Overture No. 3, Alban Berg’s Concerto for Violin and Orchestra, and Dmitri Shostakovich’s hotly debated Symphony No. 5 in D minor. The concert repeats at 8 p.m. Saturday at Symphony Hall.What makes a great conductor? The late André Previn — conductor, composer, concert pianist — believed it’s the ability to convince an orchestra that what he or she is asking for is worth trying. “It’s very easy to make an orchestra play,” he said. “But very difficult to make them want to.” He criticized a generation of young conductors who looked “balletic” when conducting but couldn’t make anything happen in the orchestra.

Canellakis just happens to be balletic on the podium . . . but if Thursday’s concert is any indication, she may have the goods to back it up. Canellakis, a New York City native, is chief conductor of the Netherlands Radio Philharmonic Orchestra and principal guest conductor of the Berlin Radio Symphony Orchestra. She conducts with grace and the bow arm of a former violinist. Canellakis barely referred to the score during Beethoven’s overture, her beat pattern natural and always reflective of what she wanted with regard to dynamic level or articulation. She began the overture gently, but before it was over gave us a tiny glimpse of showmanship.

Violinist Itamar Zorman closed the first half with the dual-movement concerto that Berg intended as a memorial to Alma Mahler’s daughter, Manon Gropius. It’s a peculiar 12-tone composition that includes a brief quotation from Bach’s Cantata No. 60, “Es ist genug” (“It Is Enough”), as well as bits of an Austrian ländler and at points his own musical signature.

Zorman, an esteemed violinist and winner of Russia’s 2011 International Tchaikovsky Competition, gave an uneven performance. While he played the impassioned second movement with incredible technical precision, involving left-hand pizzicato over the fingerboard and dazzling double stops, the first movement sounded noisy. He couldn’t seem to find his sweet spot, playing with too much bow pressure, wandering too close to the bridge at times and ultimately obscuring moments that could have been incredibly beautiful. 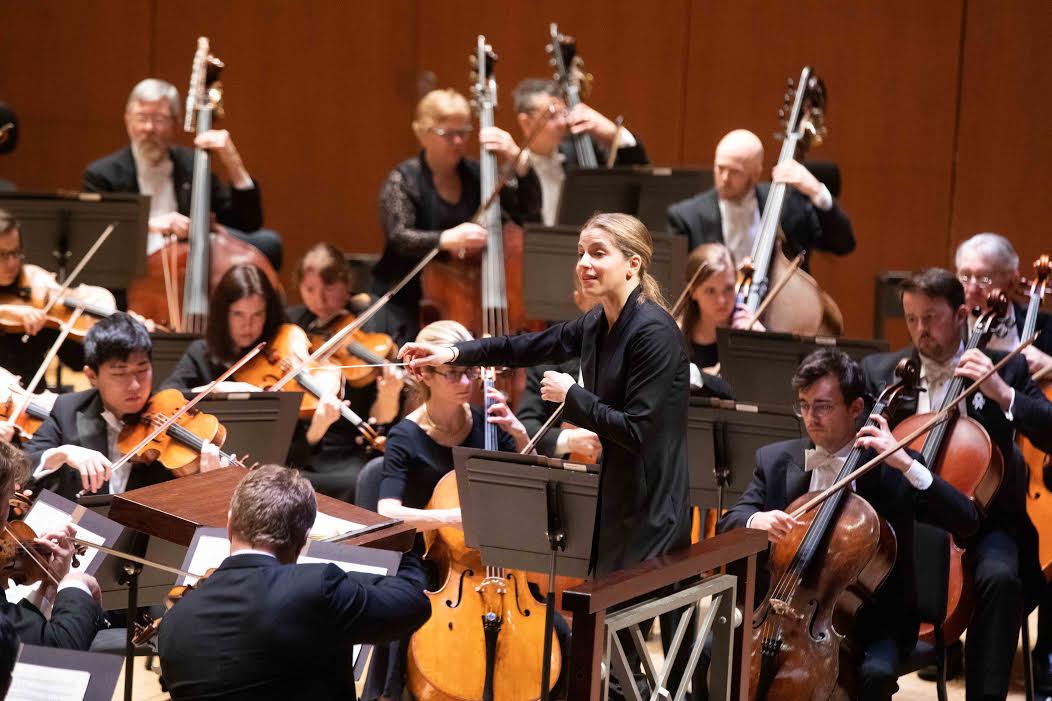 Canellakis and the ASO anchored the concert with Shostakovich’s weighty Symphony No. 5. Composed in 1937, on the cusp of the Second World War, the work premiered at a prominent festival that celebrated the 20th anniversary of the Soviet Republic. Shostakovich had lost government favor a year earlier, after Stalin attended a performance of his wildly successful opera Lady Macbeth of Mtsensk. In the interim, Shostakovich was blacklisted, living in a climate of fear permeated by the disappearance of several colleagues and family members. The Fifth Symphony was an opportunity to redeem himself.

It is with this historical context in mind that conductors interpret the famous symphony, particularly with regard to the tempo of its final movement. On Thursday the finale began with a rapid crescendo of trills that led to the horns’ raucous declaration of the first theme and proceeded at a maddening speed. Adrenalin-charged, yet crisply executed, it seemed a forgone conclusion that Canellakis would give us the up-tempo, triumphant ending that, in essence, signaled Shostakovich was currying favor with his Soviet tormentors. Musically, it would have been a dramatic finish to her ASO audition.

But we were fooled. Instead, we heard a majestic and tragic slower tempo. During the coda Canellakis held the violins back as if they were trudging through wet sand while the trumpets and trombone restated their initial ascending theme. With Canellakis’ interpretation we could really hear Shostakovich’s cleverly concealed quotation from Bizet’s opera Carmen in which the heroine sings “Prends garde à toi” within an aria called the Habanera. The statement is a warning to be on guard — likely Shostakovich’s code to beware of Stalin and his Communist Party — in the most audacious of settings.

Canellakis and the ASO received a standing ovation and at least three curtain calls from a packed house. It was clear she had convinced the ASO that what she was asking for was worth trying . . . and it was.